What I Learned Today....Life’s Not Fair

As a typical middle aged American male, it’s fair to say I have repressed emotions and am not always great at expressing my feelings in a way that make people sympathetic or empathetic.   It’s 1:46am on Friday morning and instead of sleeping I am actually wrestling with what ‘emotion’ I am feeling right now so I thought I would write and see if that helps.

Let’s’ start with what emotion it’s not.   I’m not angry, I’m not happy, I’m not bitter, I’m not “sad”, although that might be the closest there is.   Maybe by the end of this rant I will be able to name it....go along with me on this journey and see if you can help.

After a morning of drama it was determined the WIAA would limit attendance to the GBB tournament but not cancel it.  I was worried....but hopeful.  I knew my shaky status as “media” put me in jeopardy of missing the sacred event we build to starting in November.  But the basketball gods were kind and the WIAA gods said, “let the media come”.   As “media” I guess I understand that if anyone was going to get the dreaded Corona virus losing some media may not be the worst thing and I knew I was going to risk it so I said...yeah...let’s do this.

So my originally scheduled journey to the Resch Center via Mishicot to spend a day documenting the Indians first trip to the GBB state tournament was back on.  I knew I was getting in, but I still......fretted?  No, that’s not it....But there was something in my mind that said...”you may not have heard the last of this.”  Oh wait, that was Mallory Liebl, Brookfield Central GBB Coach, ringing the bell of the apocalypse warning us fools that the sacred event was still in danger and she would wager her kingdom (or queendom) that the event would be canceled.

I had an unbelievably great time with the Mishicot GBB team, but had to see their sad faces when they found out they could only invite 4 people to what amounted to one of the biggest events of their young lives.   How could 16 year old kids be put in that position? “Well, we know you want your parents to come...but tell us....which set of grandparents would you rather have there?”  Fortunately Coach Garceau and his staff stepped in and help mediate, coordinate, and allocate, and relived the girls of this torturous duty.   So, I was relieved!  And then I had the honor of attending the Mishicot HS pep rally and saw what this community is all about.  Talk about amazing?  What a high that was, to see pre-k through 12th grade students there and AD Risch telling the families of the players it will probably be standing room only.   And Coach Garceau thanked little W7 publicly for being here....Well, that’s as good as it gets right?  Nope....we go outside and there are 17....yes 17 fire trucks, ambulances, and police cars ready to escort the sectional champs out of town.   And do the players get on a chartered bus with all the frills. Nope...yellow school with the words “MISHICOT SCHOOL DISTRICT” in block letters on the side. And how did these girls handle that?  Oh, pretty much the way Dorothy did when she thought she was leaving Oz with the wizard in the ballon...waving goodbye...laughing, crying, and anticipating what awaited them in the magical world of the Resch Center.

But first a magical stop in the land of Applebees with the team.  Understaffed, with a broken Dr. Pepper fountain gun, the girls kept up the brave faces and talked about their impending matchup with the two time state runner up Melrose-Mindoro Mustangs...I felt better....that maybe Applebee’s really is a great place in the neighborhood and all was right with the world.  Then I looked up at the tv that sat overhead and once again the cosmic basketball gods struck and this time brought down our good friend Julianna Wagner from Lake Mills.  Their first-team all-conference player...just two days after taking away their opponent’s point guard....and our good friend Bridget Froehlke from Wrightstown and my face darkened and I became angry...knowing how hard these two worked for YEARS to make it to this stage...only to hear no.  What in the actual h#@@!

But, time was not our friend and we rushed off to see our good friend Ryan Borowitz and his amazing facility he has built.  He was offering all the state GBB teams the opportunity to come and hang out and blow off steam while waiting for their games...and doing this...for free.  I talked to Ryan and saw his passion for the game, his love of kids, and my mood lifted.   I then saw our friends from Pewaukee GBB come into the place and I was back to elated.  To see the Pirate girls - Schill, KO, Viv, Jerd, the Newcomers...well, who wouldn’t be happy about that right!

Of course it was time to go again and we made our way to the Resch Center for the game.  Now, I have been to plenty of GBB games where there were less than 88 people in the stands...that’s more common than you’d think...but usually not in 10,000 seat arenas.  At this point the feeling of surreal”ness” took over.   No concessions, no bands, no stat guy dropping off the first half numbers in front of me, no....well, no anything.  I truly felt like I was in an episode of the Twilight Zone as the last man on earth and looking around to try and figure out where all the people were.

But...again, time is not our friend and soon the game was underway.  Credit the WIAA...they tried to make it a great show...and both the Mishicot and Melrose-Mindoro fans....all 176 of them did their very best...but well, the place was empty....and that’s how I was feeling...empty....

But....sensing the pervasive emptiness the girls from both teams put on a game full of twists and turns...drama....physicality....sportsmanship...and grit and determination....and as Callie Kreuger’s last second shot in overtime that would win the game was released and floating toward the hoop......hope returned....this could all be fixed....everything could be great when this shot finds the bottom of the net....the floor would be engulfed with players seeking to tackle Callie in jubilation in one of the most exciting conclusions ever in the state tournament.....and then the shot hit the back iron and bounced out....and just like that Mishicot’s season was over....and while happy for Melrose-Mindoro I was angry....but that’s not fair...that’s not how it’s supposed to end....these kids were supposed to win...

But....then i saw the Mishicot players....once again with those sad faces...puffy eyes, and broken hearts....and I was no longer angry...I was protective....(those dad instincts tend to kick in from time to time)....I asked Kylie Schmidt a question in the post-game interview about her team, the seniors, and her community.   And I remembered all that happened today...and I was.....i don’t know....I was.....at peace?

But.....on the ride home Mishicot assistant coach Conor DuBoyce said the last thing I expected to hear.  “Gary, the rest of the GBB tournament has been canceled.”  Wait....what?  I must have misheard that...you mean like postponed right?  You mean, you forgot how to read and are just saying nonsense things right?

And then....realization and heartbreak set in...but that’s not fair.  Do you know how many things are supposed to happen this weekend?  Do you know how much unfinished business there is that is going to be unresolved...just hanging out there forever....with no resolution ever?  Do you know that we live streamed 128 games and this is the ending we get so excited for and countdown for like small children for Christmas Eve?   Do you know how many presents are going to forever be under that tree we will never get to open?  I wanted to open them all and see what was inside each of them.

KO and the gang from Pewaukee in their first ever trip to state after years of heartbreak in regional/sectional games?   This was their redemption....I was going to call the game for Kennedy’s grandparents in Washington.  That’s not fair.

Macy McGlone and the Dime Princess to try to finish their quest at returning Hortonville to the top of the mountain in Division 2.  They came all this way...why are we making them turn around at the gate?   That’s not fair.

DSHA coming in the back entrance of the Resch.  On December 30 I sat with Coach Hendricks and his players in the lobby of the Resch as he talked about how special it was to come into the Resch as a player and not a fan...and how his team had the chance to do it this year...with a group of special players.   And how Aliyah Garcia made a 3 pointer at the buzzer in double overtime to win the game in the regional finals and....They’re...they’re coming...why isn’t the back way open?   They are supposed to come in that way.  That’s not fair.

Larry Klein...our beloved producer....has media credentials to sit in press row.  After sitting through over 150 GBB and volleyball games for peanuts in compensation...I could give him this experience as a way to say thank you....a chance to be “Larry Legend” and hear from all the players and coaches how much they appreciate all his time and effort.  That’s what I had planned for him.   That’s not fair.

So many stories, left unfinished....that will never have an ending....that is not fair and that’s not right.   But it’s not the WIAA’s fault....they are doing what they have to do...and I get it...and then melancholy hits as I remember my dad telling me long ago...”son, life is not fair.”

And preparing to pout the rest of the night, we pull into the Mishicot HS parking lot and what do we see.  Dozens of people standing outside, cheering, screaming and so proud of their players.   And the Mishicot kids got off the bus and were engulfed and embraced by the crowd....and as I stood off to the side and watched it happen....I finally felt......I don’t know..I guess the rant didn’t help pin down the emotion....but it does make me realize....I had a pretty incredible day....I just wish I could have had just two more......for them.....for who we do it for.....for the girls. 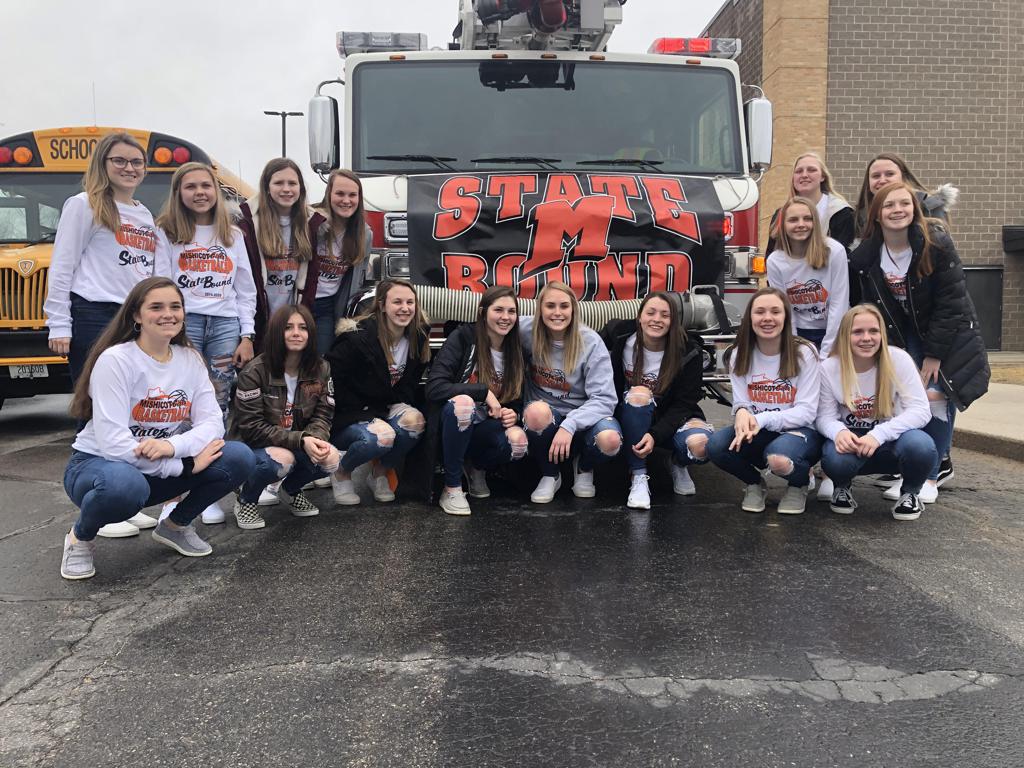